Breaking Radio Silence: What's Been Up With Research and Teaching

It's been a great while since I've posted to this blog, but I'm back and hope to be consistently posting once again. I did manage to get a lot of comics-related work done this summer, both on the Marvel 1976 project and on an essay called "More at Stake: Vampires and the Comics Code." That work and the current work I'm doing on The Electric Company and their partnership with Marvel in the 1970s (remember Spidey Super Stories? Spider-Man's recurring appearances on the television show?) really seem to be swirling around the same ideas regarding multimodal literacy that I've been developing over the last several years. So, over the last few months, the larger project has been becoming more coherently articulated in my head and that's been very exciting. I'll try to spin out some of these ideas and the relationships I see between them over the next few months.

The other pressing issue right now is book orders for next semester's Contemporary Graphic Novels seminar. Here's my mostly finalized list (in no particular order). Any comments would be much appreciated.

There you have it. I'll likely be having the students in the seminar blogging here about graphic novels in the collection at UW's Leddy Library, so stay tuned for that beginning in January. And I promise not to take six months between posts again. No, really.
Posted by Dale Jacobs at 5:06 PM 4 comments:

As I mentioned in my last post, I am just beginning work on a book-length project that uses Marvel comics circa 1976 as its frame. The natural question, of course, is why this focus? Why 1976? Why Marvel? Why not DC 1985 or Charlton 1968? Or why not Marvel in the 1960s?

Let me explain. In March we taped an episode The Comic Book Syndicate on which I was a guest panelist (the episode will premiere on Wednesday, May 6 at Phog Lounge and will soon be on Cogeco in Windsor). As one segment, Michael Poirier asked us each to talk about the first comic we remember reading. It wasn't one specific comic that came to mind, but a storyline in Marvel Team-Up that involved Spider-Man and the Scarlet Witch traveling back in time to the Salem Witch Trials.

The storyline, which featured Cotton Mather as one of the villains, played out over several issues, pulling my ten-year old self into the narrative in ways I had never experienced before in my casual reading of Spider-Man, Batman, or Archie.

That story arc led me to explore the rest of the Marvel universe, or at least the small corner of it that I could afford and that was available to me at the local drugstore. It led me to, among other things, the first issue of Nova, The Fantastic Four, Captain America, The Amazing Spider-Man, and the first issue of Peter Parker, The Spectacular Spider-Man. In other words, 1976 was the real beginning of my real interest in comics and the point at which Marvel became an important sponsor of my multimodal literacy, an idea about which I've written in "Marveling at The Man Called Nova: Comics as Sponsors of Multimodal Literacy" (College Composition and Communication 59.2, December 2007). As I thought about those issues of Marvel Team-Up and the other Marvel comics I consumed that year, it dawned on me that by focusing on Marvel comics in 1976, I could productively expand on the ideas I had begun to develop in "Marveling." The frame would allow me to discuss not only multimodal literacy, but related issues such as continuity, materiality, paratextuality, and intertextuality, and the ways in which the literacies I was developing by reading Marvel comics were intimately connected with the literacies I was developing through other sponsors of literacy in my life.

For example, in reading those issues of Marvel Team-Up, not only was I fascinated by the superheroes and their predicaments, I became so curious about Salem, the Witch Trials, and Cotton Mather that I went to the school library to find out more. For the first time history mattered to me as a ten-year old boy in rural Alberta and so, at a very rudimentary level, I began to explore it.

And, of course, the comics drew me into the world of the American bicentennial, leading me to wonder about what that all meant. What were they celebrating? Why? In essence, though I couldn't have named it at the time, I was beginning to ask questions about national identity and about my identity as a Canadian (read not-American). Hard stuff for a kid, but comics made me begin to grapple with these issues and have conversations with my friends about them.

So, why Marvel and why 1976? Short answer: because it helps me to situate my thinking about a variety of questions regarding literacy and comics. That said, I'm planning to read everything Marvel produced that year (I realized the cover date is a couple of months later than when it came out, but using a 1976 cover date simplifies the frame). That's a lot of comics -- just over 500. I'll be tracking them down in multiple forms (back issues, Essential editions, Marvel digital database, Michigan State) and thinking about the experience of reading those multiple formats will form part of the project as well.

Wish me luck as I go back in time and visit my ten-year old self. It should be interesting.
Posted by Dale Jacobs at 10:12 AM 2 comments:

Contemporary Graphic Novel Seminar: Over Now, But Back Next Yeat

Here we are at the end of another semester. I want to thank all of the members of my Contemporary Graphic Novel Seminar for all of their great contributions to the blog over the last several months. It proved to be a fascinating class and I'm pleased that readers got to see just a bit of the complex thinking about comics that students did. Again, thanks to all who contributed, both in class and on the blog. And thanks as well to Jeff Lemire for his productive visit to class and for his wonderful reading. It was a great semester.

A lot of the students who are currently in their 3rd year at UW have asked me if I'm going to be teaching this course next year, so I am happy to announce that I will be teaching the Contemporary Graphic Novel Seminar in the Winter 2010 semester. I'm looking forward to more great conversations about comics and comics theory; readers can look forward to a whole new set of guest bloggers for More Than Words.

In the meantime, I'll be back with my regular musings about comics, theory, literacy, and education. As I do so, I plan to use the blog to do some thinking about a larger research project that involves Marvel 1976. More on that in the next couple of days.
Posted by Dale Jacobs at 9:28 AM 2 comments: 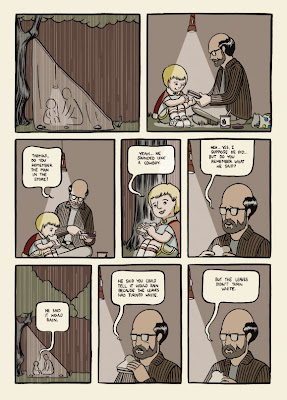