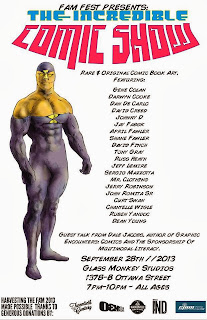 I will be speaking about Graphic Encounters at The Incredible Comic Show, a comic book art opening, on Saturday, September 28 at Glass Monkey Studios in Windsor. It should be an excellent night.

CFP for
Posted by Dale Jacobs at 10:57 PM No comments:

Graphic Encounters: Comics and the Sponsorship of Multimodal Literacy

It's been a long time since my last post to this blog. The majority of the previous posts were written by students in the comics classes I have taught over the past several years. Since I am not teaching such a class this year, the blog will now revert back to my own explorations of comics and comics theory.

In the past couple of years I have been busy working on my book on comics and literacy. It's called Graphic Encounters: Comics and the Sponsorship of Multimodal Literacy and was published last week in North America by Bloomsbury Academic (out in October in the UK). To say the least, I'm very excited about its release.

Here's the description of the book and the Table of Contents:


Graphic Encounters moves beyond seeing the reading of comics as a debased or simplified word-based literacy. Dale Jacobs argues compellingly that we should consider comics as multimodal texts in which meaning is created through linguistic, visual, audio, gestural, and spatial realms in order to achieve effects and meanings that would not be possible in either a strictly print or strictly visual text. Jacobs advances two key ideas: one, that reading comics involves a complex, multimodal literacy and, two, that by studying how comics are used to sponsor multimodal literacy, we can engage more deeply with the ways students encounter and use these and other multimodal texts. Looking at the history of how comics have been used (by churches, schools, and libraries among others) will help us, as literacy teachers, best use that knowledge within our curricula, even as we act as sponsors ourselves.

Posted by Dale Jacobs at 1:34 PM No comments: