A post by Cristina Naccarato, a student in my Winter 2010 Graphic Novels class.

Local was a twelve-part limited comic book series, written by Brian Wood, illustrated by Ryan Kelly, and published by Oni Press. Each issue of Local (like Wood’s more recent series, Demo) was intended to be a stand-alone short story that took place in a different city across North America. Though each issue was mean to be self-contained, a recurring character, Megan, acts as a thread for the reader of this monthly who followed the series in sequence. In some issues, Megan is the main character, and in others, she is merely a spectator, or background figure, yet always recognizable, with her large oval eyes, freckled nose, and key around her neck. As Local went on, it became more of a coming of age story for Megan, while still maintaining it’s establishment as a stand-alone series.

Local in many ways, explores the notion of personal identity, and the idea of how identity is often shaped more by where you are, rather than by who you are. Location in terms of identity is crucial, and for Megan, in every city she travels to, she can reinterpret herself recreate her image as much as she wants. For example, in issue #5, “The Last Lonely Days at the Oxford Theatre,” located in Halifax, Nova Scotia, Megan recreates personal and physical identity throughout the entire narration. Her hair progressively gets shorter, and shorter, her personal history changes each time she encounters a new person, and she also presents herself with a different name each time. Being new to Halifax, Megan’s location allows her to do this without any repercussions, and emphasizes how location is at times indicative of how you identify with yourself.
In terms of locations, and Megan’s constant traveling, the site specificities of each issue make it “Local” to the people who are familiar with the locations, and act as a way in which Wood and Kelly could relate on a more personal level with their readers. Wood mentions in an interview with Comic Book Resources, “I picked twelve cities and towns for the stories, both for aesthetic reasons and commercial (I wanted cities that has strong indie comic shops, so that the book would actually be found there).” Each issue contains real places that readers can identify with, and in turn, also draw from their own personal memories of said places, which creates another element that readers can connect with in a profound way.
As above mentioned, though each issue is meant to be self-contained, and can be read this way, the progression of Megan’s identity throughout the entire series, shows a movement from a confused drifter, to someone who is more self-aware and stable. Another element most young adult readers can relate with. This progress, however, can only be seen by reading the entire series in succession.
Posted by crustina at 6:55 PM 37 comments:

Marjane Satrapi's Persepolis, the Visual Construction of Identity, and "The Veil"

A post by Cristina Naccarato, a student in my Winter 2010 Graphic Novels class. 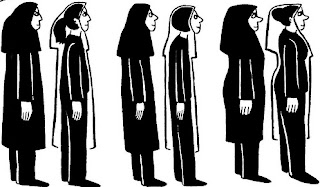 Persepolis by: Marjane Satrapi
Cristina Naccarato
Marjane Satrapi’s Persepolis, as mentioned by J. Kyle Lebel in a previous post, is an autobiographical memoir about a young woman growing up during the Islamic Revolution, the capture of the American Embassy, and the Iran-Iraq War. Persepolis is an autographic (as Whitlock and Poletti describe in their essay, Self-Regarding Art, " Life narrative fabricated in and through drawing and design using various technologies, modes, and materials") exploring Satrapi’s own personal history, but also how her own history is intertwined with the history of her country, and in turn how her identity has been constructed through these relationships.


Satrapi’s recollection of her experience depicts how great of an impact the Islamic revolution has on her own life, as well as the lives of young Iranian women.

One of the biggest impacts these women had to face was the forced wearing of “the veil.” This was a direct symbol of the force that Islamic fundamentalism had on the bodies of Muslim girls and women. Satrapi specifically, growing up in a radical family with two parents who were Marxist intellectuals, found this particularly restrictive, and threatening, and in turn, experienced a loss of self in this process.
Satrapi’s use of a black and white panel, emphasizes this lack of individuality, yet, she very consciously individualizes each character through herdrawings. Her female figures are human, have their own character, and individuality traits even with the veil on. By visually showing their restrictive appearance, but then adding specific character differentiations, Satrapi multi-modally constructs the identity of her characters, emphasizing that each woman is unique. 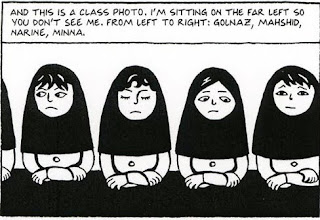 For example, in this frame, each girl has been drawn, seemingly exactly the same, but on closer inspection, Satrapi has given each female a different hairstyle, different eyes and different nose, which emphasizes her notion that these girls are all unique.

By consciously constructing individuality, Satrapi’s intend to honor the resistence of Iranian women is successful. Veiled women are often dehumanized and classified as indistinguishable, but Satrapi breaks these barriers and subverts the view of Iranian women, presenting them as individual as Western women.
Posted by crustina at 8:58 AM No comments: