Next week in the Graphic Novels seminar, we will be discussing Gerard Genette's idea of paratexts, those elements that surround the narrative text itself. He writes that, "the paratext is what enables a text to become a book and to be offered as such to its readers and, more generally, to the public. More than a boundary or sealed border, the paratext is, rather, a threshold, or -- a word Borges used apropros of a preface -- a 'vestibule' that offers the world at large the possibility of either stepping inside or turning back" (Paratexts: Thresholds of Interpretation 1-2). Prefaces, introductions, publisher's information, author's names, and titles are just some of the paratextual elements that can contain and act as thresholds to comics narratives.

Of course, the cover, with all of its individual paratextual elements, also acts as a paratext itself, quite literally a threshold for potential readers as they decide whether to step inside or turn back. With this in mind, I want to draw your attention to a new series at Newsarama called "Cover Story" that involves interviews with creators about comic book covers. The first interview is an insightful talk with Gabriel Ba about the cover of Daytripper #3 (a very interesting new book that's well worth a look). Here's a snip of what Ba has to say:

"This issue tells a very heavy story of loss, and that's what I wanted on the cover. Opposed to the two first ones that are very happy and full of colors, because we were still dealing with a word full of possibilities, this cover needed something different. The colors are more intense, stronger, and the images are darker."

It's a useful interview to read and to think about in terms of the idea of paratextuality. I'm looking forward to more of these kinds of interviews as part of the "Cover Story" feature.
Posted by Dale Jacobs at 11:30 AM No comments: 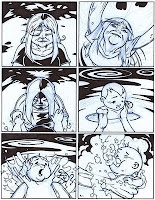 There's a good post on the process of inking right now over at Comics University. In it, Jonas Diego, the inker, explains how he works and how inking fits into the creative process of putting together Lola: A Ghost Story. Here's a sample of what Diego has to say:

"With Elbert’s pencils I don’t go immediately to inks.

I spend some time figuring out the intent for a particular page via a script I was provided with. After that I spend some time with a blue Prismacolor pencil adding elements which I feel will help in the storytelling, setting up shadows to help create the mood and ambiance the scene needs, and correct some details in the art.

It is only after accomplishing this that I start inking over the blue lines."

Too often, I think we overlook the contributions of inkers, letterers, and colorists to the process of creating a narrative in comic form. Posts like this one are a good reminder of these kinds of important collaborations.
Posted by Dale Jacobs at 10:57 AM 2 comments: